The story behind Illya

Christened as  “one of London’s most talented young professionals” 9 years ago by the Local Guardian.  Illya went against the grain, and firmly decided that being a City Slicker is not for him.  He has have now evolved into an unorthodox, eccentric entrepreneur taking the London kitchen design industry by storm.  Illya is the proud marketing director @ Illya Kitchens. He has held this position for the last 7 years – constantly building his skills and keeping a hawk eye on the kitchen and marketing industry.  Illya is honoured to be leading the most highly awarded independent kitchen company in London.  He plans to revolutionise the kitchen industry in the UK. His company has won the Best of Houzz Service 2016, 17, 18, 19). It is his aim is to make the kitchen purchasing process as transparent as possible, and bring fun to an otherwise very boring industry. 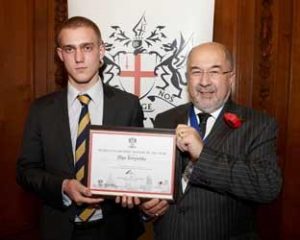 Illya awareded by the London Mayor Ian Luder in 2010.

Illya has been mentioned in national newspapers for his ability to achieve success without going to university.  Although he did secure placements at some of the most prestigious educational establishments in the country, he decided to gain direct experience.  The articles in The Guardian describing Illya’s path can be found here – career ideas for school leavers & build your career from within the workforce.

Having built a solid reputation, Illya now enjoys consulting SME businesses and individuals on digital marketing and business growth.  He also takes time out to visit schools, 6th forms & universities to give public speeches to the youth about their career options in the City of London’s financial sector, as well as in the regions.

Outside of work, Illya is an avid petrol head (Mercedes AMG 6.3 fanatic),  He loves spending time with his beautiful fiancé.  Also, a bonus fun fact about Illya – he used to box competitively for many years at his local amateur boxing club. 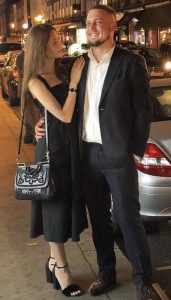 Illya on a night out with his fiancé Kristiana

Connect with me on LinkedIn

What can I do

With over a century of combined experience, the Illya Kitchens team will be happy to help you from any 3 of their showrooms (London, Reading, or Brighton).  Be assured that no-one else will give you the service which you can receive from Illya.  Prices start at £12,000.

Illya always stays on top of the website development trends, and has a team to build you, or your company a website of any complexity.  Prices start from £6,500.

AdWords is a great way to gain immediate visibility for your business online, Illya has 7 years experience in AdWords, and is Google Certified.  Prices start from £3,500/month.

SEO is the one of the most fundamentals element’s of any business’s digital marketing strategy.  Illya works with SEO experts to deliver the best ROI for your business. Prices start from £4,000/month.

Illya is an expert in Instagram/Facebook/YouTube (re)marketing.  Enquire about your needs to give your business the online exposure it deserves.  Prices start from £1,500/month

Having successfully established Illya Kitchens as one of the most dominating forces on the UK kitchen market, Illya will be happy to consult you on how to make your business more profitable.  Prices start from £150/hour.